In the tutorial below, menu commands, located in the menu bar, are in green bold text, and the submenus are denoted by the > symbol. For example, Options>Labeling>New Points Only means you have to click the Options menu, choose Labeling from the list, then New Points Only. The tool texts are colored light red. For example, New Point means, the New Point tool.

In this tutorial, we  create a rectangle using the segment tools, the parallel line tool, and perpendicular line tool.  We learn how to measure the length of segments and angles. The output is of this tutorial is shown below.

In doing the tutorial, you will learn the following:

2Be sure that point C is on line b. If you can drag point C outside line b, delete the point and repeat the construction.

3Objects can also be shown/hidden using the Algebra window by clicking the circle next to the objects. The empty circles are hidden objects while the colored circles are displayed objects. 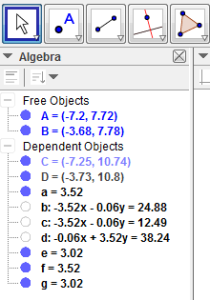 But let us look at point C. Point C is dependent object (dependent on the line), yet we can move it along line a. We will call this object semi-dependent or semi-free object. From here we have three types of objects: