Each mathematical object in GeoGebra has its own properties.  Some of the properties of a line, for example, are its equation, color, and thickness; while a slider has  maximum, minimum, increment, and animation properties. 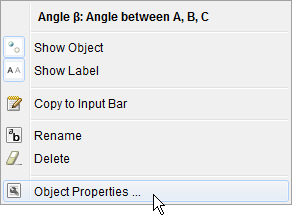 It is important to note that some properties are unique to a particular object, and some are common to many. For instance, most mathematical objects have the color property, while decoration properties are only available to lines and angles. 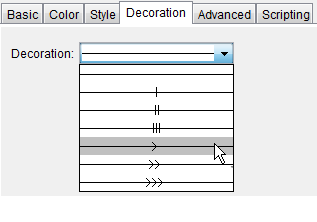 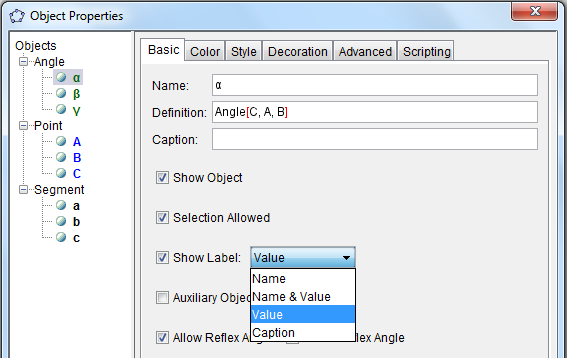 Mathematical objects in GeoGebra have three label types – name, value and caption. The name is the default label given to objects by GeoGebra. The labels that we mentioned above that GeoGebra assigns to a particular object id the name type (see the Objects window in third figure). It is also important to note that no two objects in GeoGebra can have the same name. If you give two objects the sane name, GeoGebra automatically renames the other.

The caption property is useful in labeling objects with the same letter or character. This is easier than using the text tool. For example, we have a square whose side names are a, b, c and d. If we want to label the sides s, we cannot show their names. Instead, we assign s as caption of the sides and show the Caption property in the Object Properties window.

Notice that even if the caption of the sides of the square is s, their names are still a, b, c, and d as shown in the Algebra window.

It is possible to copy the properties of objects using the Copy Visual Style tool (can be seen under the Move tool). If you copy the visual property of a particular object, all common properties will be copied to the next object.