When we divide things, we split them into ‘groups.’ Of course, we cannot always divide them equally.  For example, dividing 13 balls by 3 is the same as putting the balls into containers in groups of three. In dividing 13 by 3, 1 is left out as shown below. We have learned that the excess or the ones that are left out during division are called remainders. In the figure below, we can say that 13 divided by 3 gives a remainder of 1.

Divisibility by 3 is not as easy as divisibility by 2, by 5 or by 10. However, we note the following observations when we divide by 3.

Since we are looking at the digits and not considering the place value, we can evaluate each digit and examine the remainders. As mentioned above, 6 and 3 are divisibly by 3, because 600 and 3 are divisible by 3. Two however (or 2000) gives 2 as place value while 7 (or 70) gives 1 as remainder when divided by 3. Notice that if we use the illustration above, then we can combine the remaining balls (remainders) from the two operations and put them in a container.  In effect, there is no excess. Therefore, the 2673 is divisible by 3. 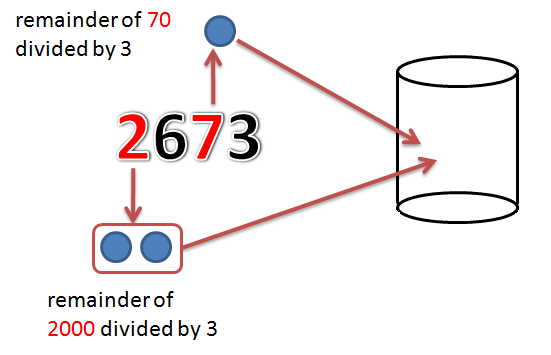 Notice that dividing the digits individually and combining them first before dividing would result to the same thing.  If we are searching for 3-ball containers that would contain 2 balls (from the thousands digit) and the 7 balls (from the tens digits) is the same searching for containers for nine balls (7+2). Therefore, if we combine all the balls and put them into 3-ball containers, we would see if there are remainders. This means that we can add all the digits of a number and if the sum is divisible by 3, then it is divisible by 3.  Hence, we have the following conclustion.