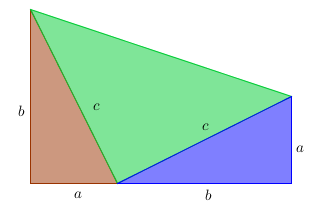 (1) Finding the area of the figure using the trapezoid

(2) Finding the area of the figure using the triangles

area of the red triangle =

area of the green triangle =

area of the blue triangle =

Multiplying both sides by

. That completes the proof.