Visualizing the Difference of Two Squares 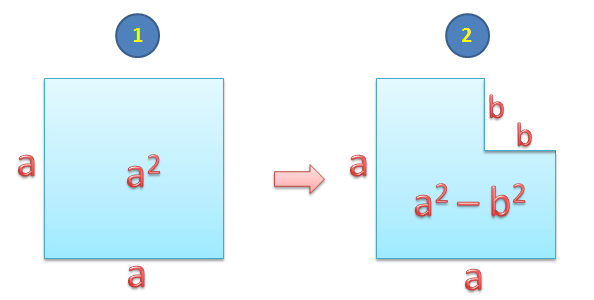 Geometric objects are powerful representations that can be used to visualize algebraic properties of mathematical objects. Proofs without words are examples of such visual representations. In this post, we relate the difference of two squares to the areas of squares and rectangles.

The difference of two squares  states that for all numbers

. The visual representation below, however, only covers the condition that

To proceed with the visual proof, we create a square with side length

as shown in (1). Then, we cut a square with side length

from its corner as shown in (2). Since the area of the larger square is

and the area of the smaller square is

, the area of the remaining figure is

Next, we draw a horizontal line segment cutting the remaining figure into two rectangles as shown in (3). We change the color of the smaller rectangle for clearer representation, and move it to the right hand side as shown in (4).

The resulting rectangle in (4) has length

We can verify this using the distributive property of multiplication over addition.  That is,

Simplifying the expression, we have

which is what we want to show.