Calculating the Area Under a Curve: An Intuitive Introduction

One of the most fundamental problems that gave birth to integral calculus was the calculation of areas bounded by curves. The Greeks used method of exhaustion to remedy this problem, particularly on finding the area of a circle. After Descartes’ and Fermat’s invention of Coordinate Geometry, algebraic solutions were utilized.

is to divide it into sub-intervals and form rectangles as shown in the first figure. Clearly, as the number of rectangles increases, the sum of all the areas of the rectangles gets closer and closer to the area of under the curve.

To explain further, let us take a specific case of the function

and find the area under the curve bounded by

, and the x-axis. As we have mentioned above, we will divide the intervals, and for convenience, we use equal intervals, and construct rectangles as shown in the second figure. In this case, we see to it that the upper left corner of all the rectangles touch the graph; the right graph or the center of the graph may also be used. 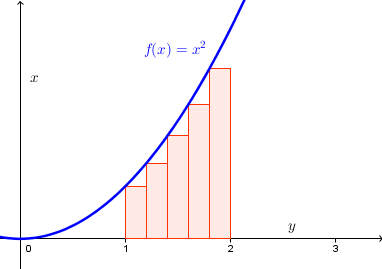 be the coordinates of the leftmost part of the rectangles, then the upper left corner of the first rectangle that touches the graph have coordinates

is  its height  (Can you see why?).  The base of the rectangle is

, the base of the rectangle, then the area of the first rectangle is

. Using this notation, the sum of the areas of the five rectangles is

which is equal to

Now, we note two things. First, the sum of the areas of all the rectangles between the

always less than the area under the curve. Second, as we have mentioned above, as we increase the number of rectangles, the better our approximation.

So, to approximate the area under the curve, we create as many rectangles as we can.  If we create

for a very large

, the sum of the areas of all

gets larger and larger, or as

Using both notations, we have

So, in our specific case above,

means the area under the curve