Sexy Primes: What Are They?

You are probably shocked about the title and you will probably think that this is a joke. Well, it’s not. There are really sexy primes and in fact, there are some research about them.

The proof that there is one quintuplet prime is quite easy. It only involves finding testing all the possible remainders of integers when divided by 5 (recall equivalence classes) and prove that one of

Domain and Range on a Graphical Perspective

Two weeks ago, I  discussed the basic concepts of domain and range which I presented in an ‘algebraic way.’ In this post, I would like to discuss these concepts from a graphical perspective.

The domain of a function

is the set of points on the x-axis where if a vertical line is drawn, it will hit a point on the graph. Take for instance, in the linear function

. Therefore, we can conclude the that domain of

is also the set of real numbers.

END_OF_DOCUMENT_TOKEN_TO_BE_REPLACED

What is the shape in three dimensions?

Got this problem from a seminar yesterday, and I think it’s a pretty good exercise for visualization.  The bottom, side, and front views of an object is shown below. 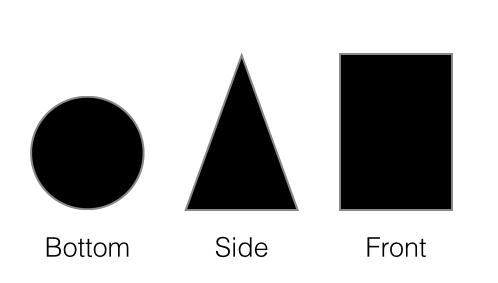 How does the object look in three dimensions? There is a good discussion about this problem in StackExchange