The time we started to learn mathematics, we also started to learn its vocabulary. We have learned about the definitions of terms such as triangles, fractions, polynomials, axioms, etc.  In our years of studies, we also have acquired the skill of being concise and precise in what we say or write.  Like in other fields of endeavors, we need to understand each other and make sure that we mean the same thing when we say a particular word. That is why we need to define them.  For example, when we say p0lygon (see figure above), we mean (loosely) that it is a plane figure bounded  by a finite number of line segments. Notice that from the definition itself, we must also define the other terms used. What do we mean by plane figure or line segment? END_OF_DOCUMENT_TOKEN_TO_BE_REPLACED

Is a square a rectangle?

Note: This article is written for an elementary school students’ point of view.

I have noticed that the topics I am discussing is getting deeper and harder, so let me break the spell by this very elementary question:

Before we answer that question, we must know first what a rectangle looks like, and we must also know its properties.  Many doors and windows, for example, are in a shape of a rectangle. We can observe that a rectangle has the following characteristics:

For those who have already learned about the parallel postulate, you will probably agree that some of the observations above can be derived from the other properties, but we will leave it that way, for it is not that relevant in the following discussion. END_OF_DOCUMENT_TOKEN_TO_BE_REPLACED

4 comments are squares rectangles, is a square a rectangle, properties of quadrilaterals, shapes rectangle

The Search for Magic Squares

If we place the digits 1, 2, 3 all the way up to 9 in the nine “boxes” shown in Figure 1 with no digits being repeated, such that the horizontal, vertical and diagonal sums equal 15, then we have a 3×3 magic square.  Not many people know, but there is a systematic way of locating the positions of the digits to construct the 3×3 magic square. 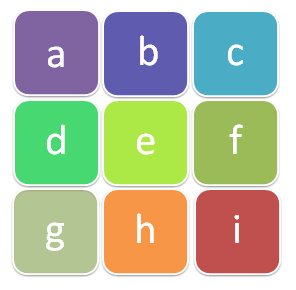 Looking at problem above, we know two facts:

With these two facts, we can use four equations containing e.

Rearranging and regrouping, we have

Therefore, the value of our center box is 5.  We now put 5 in place of e as shown in Figure 2. 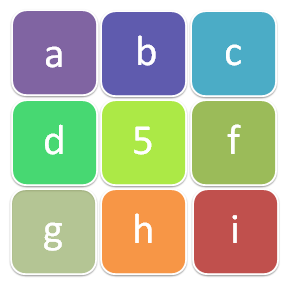 The best that we can do is to find the square where we will put the largest or the smallest number (Why?).  Suppose, we let a = 9. It follows that i = 1 as shown in Figure 3.

Notice that we could not put 8 in boxes with red letters, since having 9 on the same row or column would already add up to 17. Therefore, the only boxes that we could put 8 are in box f or box h. 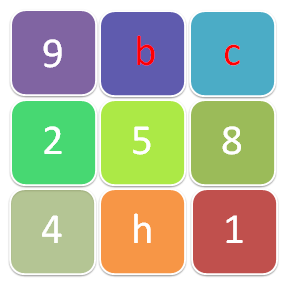 Question: Can we put 9 in the other three corner squares? Explain your answer.

It is not possible to put 9 in square a, so let us place it in square b.  In doing so, we come up with the magic square shown in Figure 5. 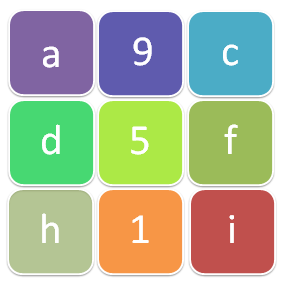 It is reasonable to put the smaller integers in the first row where 9 is placed, since putting larger integers, would make the sum greater than 15. The next smallest integer is 2.  Now, let a = 2. This makes c = 4, h = 8*. With the given numbers, it is now possible to fill in all the squares as shown in Figure 6. 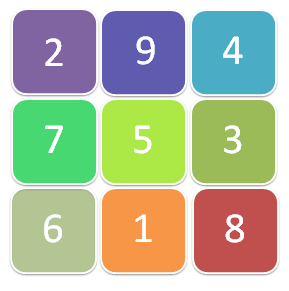 In creating bigger magic squares, more “guess and check” strategy is needed.  However, the strategies that we have used in this discussion can also be useful. Generalizing our solution above, we can use the following facts:

1.) The sum s of the numbers of the an n x n magic square is described by

2.) Since each magic square can be divided by n groups with the same sum s, therefore each row (or column or diagonal), has the sum s/n.

NOTE: This post was adapted from the book of Oystein Ore entitled Invitation to Number Theory