Derivation of the Quadratic Formula

When we discuss about functions, we usually talk about their roots, or geometrically where their graphs pass through the x-axis. For example,

. As a consequence, (i) if we want to find the root of a quadratic function we have set

and then solve for the values of 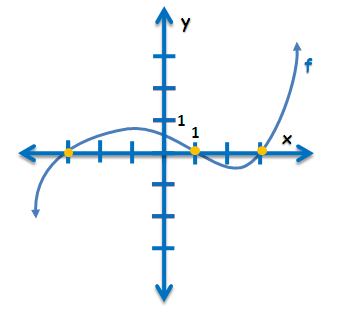 Figure 1 – The x-axis and the line with equation y = 0 are basically the same line so all points on the x-axis have y-coordinate 0.

With the things above in mind, let us find the roots of two quadratic functions:

Finding the root by Factoring

The roots of the function

are easy to find. As we have said, to get the root of a function, we set

. Solving by factoring, we have

. Solving for the value of

on both equations, we have

Thus, even though we have not seen the graph of the function yet

, we are sure that it will pass through

. If you want to verify if the graph of the function

indeed passes through the

, you can verify its graph using a graphing software or a graphing calculator.

Another possible interpretation of the expression

can be the area of a rectangle with length

. The distribution of the products of the terms of the expressions are represented by the four rectangles formed shown below. 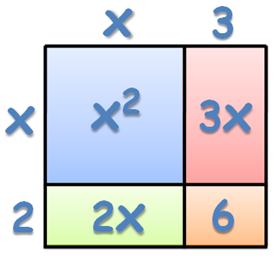 Let us try another example: Let us find the roots of the quadratic function

. You will probably observe that there is no way that we can factor this expression. The last term is

, but there are only two factors of 1:

, so this means that that the numerical coefficient of

, but it is equal to

. Hence, the expression is not factorable.

Since, the expression is not factorable, we cannot find the length and width of a rectangle with area

. The easiest way probably to find its length and width is to assume that it is a square.

is a real number. Also,

as a side of the square, then the product of the expressions will form two squares namely

, and 2 congruent rectangles with each having an area of 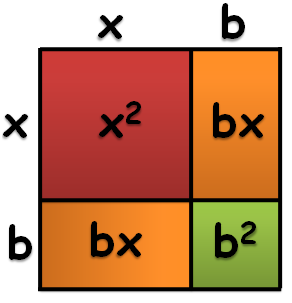 If we want to use the product of

above, first, we have to take off

as one of the squares. Then we are left with a figure with area

which we will divide into two congruent rectangles. If we are going to follow the positions of the rectangles in Figure 4, then we will have an

and two pieces of

(see Figure 5).To construct a square, we extend one of the sides of each of the congruent rectangles. 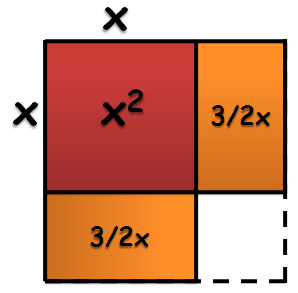 Since we have two small rectangles with area

, and the longer side (in the diagram) is

, it follows that the other dimension is

which gives us a smaller square with area 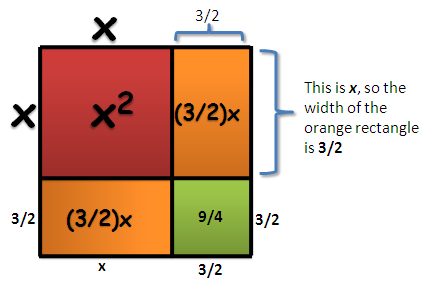 The biggest square formed in Figure 6 has area

more than our original quadratic expression, so we will deduct

Algebraically, if we have the expression

, and we want to “compete its square”, we want to transform it to an expression of the form

. Another example is that

can be written as

. Note that the coefficient of

so that we are sure that a square

is formed as shown in figures 4,5 and 6. In general, the possible steps that we are going to create using the general equation

and then find the value of

In constructing the square in Figure 6, we went through the following processes:

(ii) We made sure that the numerical coefficient of

to ensure that we have a square with factors (side length)

(iii) We isolated the constant term

, and we just used the first

and the second term

(iv) To get the area of the smaller square, we divided the numerical coefficient of the

then squared it to get

. The rightmost column of the table shows the generalization of our steps, which is getting the roots of the quadratic function 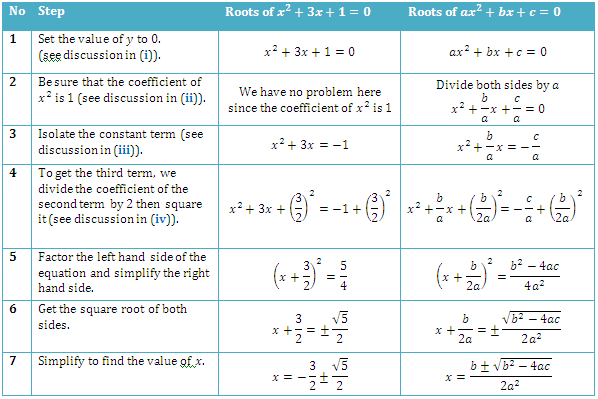 Figure 7 – A step-by-step derivation of the quadratic formula.