In this tutorial, we learn one way: To create a circle and use the center of the circle and two points on its circumference to form an isosceles triangle. 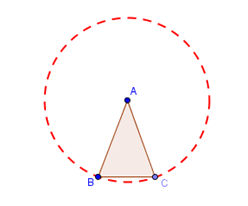 The idea is to create a circle with radius AB, create point C on the circle and connect the vertices with the Polygon tool. The last step is to hide the circle. If you have used GeoGebra before, then this will be very easy.

If you have used GeoGebra before, it is possible to construct an isosceles triangle in other ways. Some of the tools that you can use are: