Now, how on earth did he do it?

Well, let’s have a few examples. Since it is very hard to add 100 numbers at once, we start with smaller numbers and see if we can see a pattern. 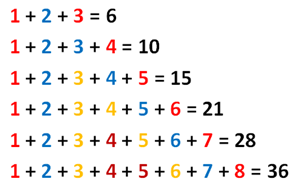 Now, let us generalize the pattern. What if we add the number from 1 through any number n? That is, what is the sum of

Notice that each pair has a sum of n + 1, and we have n/2 pairs of them. Therefore, the sum of all the integers from

positive integers is equal to

Exercise: Notice that the example was specified the first positive integers whose largest term is even. Explain why or why not the generalization will work if the largest integer is odd.

Another strategy is to let

be the sum of the first

integers and then adding another

whose order of the sum expression is reversed.

From the equation above,

. This is similar to our answer above.

How do we prove this? We need the proof of mathematical induction.