Intersections of Planes with Google Sketchup

At the information age, most of the younger generation of teachers cope up, but the not-so-young sometimes prefer the old ways. Nevertheless, great teachers are just great, no matter how they teach.

One of my professors, despite being a graduate of Stanford and a licensed actuary, was one of those who chose the old ways in teaching.   Notwithstanding the availability of laptops, LCD projectors, and 3D math software, he would carry his dilapidated plane model made of cardboards and grin in front of the class and would proudly say that it was imported from other countries.  In several of our meetings, he would explain the possible positions of the 3 planes often needing someone to hold the cardboards, and would represent lines with straws (yes, straws used in drinks).  The planes can be parallel, or they can intersect several ways (as shown below). His old ways, along with his one-of-a-kind sense of humor  made the class very lively and often laughing. 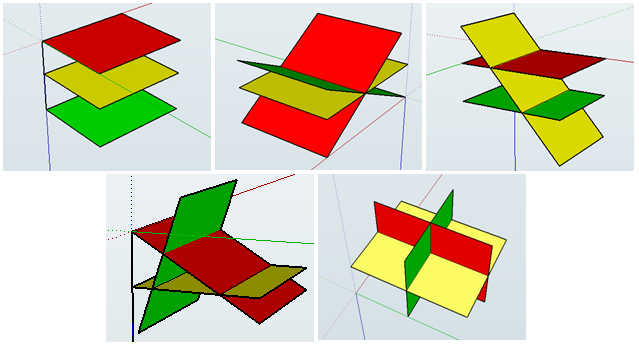 I created 3d models of the figures above using Google Sketchup (I hope he finds this blog), and I hope that the “latter generation of teachers” would be able to use them.  Of course, undergraduate mathematics teachers may use Maxima or Microsoft Mathematics (they are free), or any commercial software of choice to plot 3d graphs. However, if you are teaching elementary or middle school mathematics, and want to introduce the concept of plane in your class, then the free version of Google Sketchup is more than enough.

My apologies, I am using a different hard disk with no zip software, so you have to download the files one by one. You must have Google Sketchup to open these files. Have fun exploring. 🙂