Looking at the color pattern above, we can see that there is something very special about square numbers. Each square number can be represented as the sum of odd integers.  The first four examples are shown below. 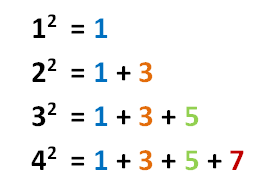 is a perfect square, the three numbers will satisfy the Pythagorean Theorem, and since

is an integer, it follows that

is a square number, then

for some positive integer

to be a positive integer,

must be positive odd integers greater than 1 (Why?).  This implies that for all odd positive integers

is a Pythagorean Triple.

.  This gives us the triple

. The first ten values of

and the corresponding Pythogorean Triples are shown in the table below. 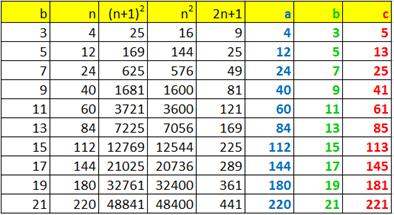 From the table, it is clear that we can generate infinitely many Pythagorean Triples using the method above.