More examples of proof by contradiction

is irrational. The proof of this is basically the same as example 1, so it is left as an exercise.

Example 3: Proof that there are infinitely many primes.

Suppose the statement is false. Then there is a rational number

. Now, squaring both sides we have

is irrational, and we know that

is rational. This makes the left hand side of the equation irrational and the right hand side rational —  a contradiction!

Therefore, our supposition is false, which implies that

Example 6: If a line is tangent to a circle, then it is perpendicular to the radius at the point of tangency.

Consider a circle with center

tangent to the circle at

. We have to show that 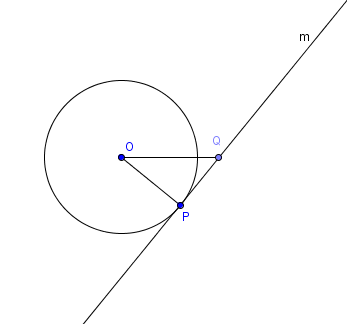 . Then there exists a segment

. If so, it follows that

lies outside the circle since

is a tangent line. Therefore

. But this contradicts the previous statement that

. Hence, our supposition is false. Therefore,

Credit: Example 5 was adapted from Numbers: Rational and Irrational by Ivan Niven

3 comments irrationality of square root of 2, mathematical proofs, proof by contradiction, proof of the infinitude of primes, proof strategies