Introduction to the Geometer’s Sketchpad

Geometer’s Sketchpad (GSP) is a commercial geometry software created my Nicolas Jackiw in the 1980s. It is similar to GeoGebra, but with fewer tools. On the one hand, it is more difficult to construct geometric objects using GSP compared to other dynamic geometry software; but, on the other hand, it can be inferred that because of the lack of tools, it may improve geometric construction knowledge better than many geometry software.

The Geometer’s Sketchpad (version 4.07) window is shown in the figure below. For now, we will be using this version in our tutorials (I have not bought a new version yet).  However, all of the tutorials in this series are also compatible with the latest version (version 5). 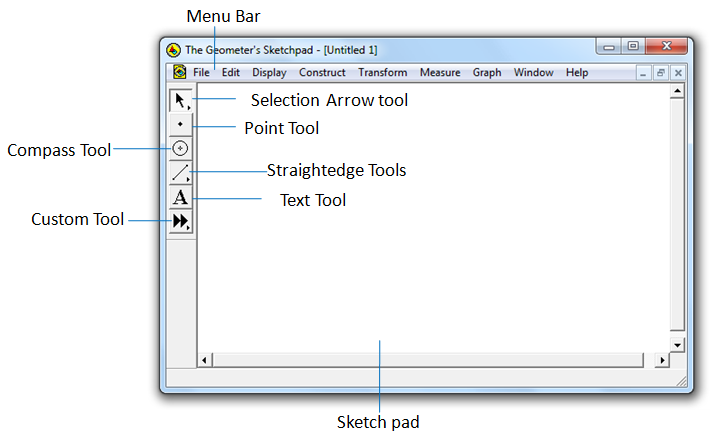 The part of the  GSP shown above. The menu bar contains the menus (File, Edit, etc.), and the sketch pad is where geometric objects are drawn.  The toolbar  is found on the left part of the window contains the following tools:

Since you are familiar with GeoGebra, it is now very easy to learn GSP.  In the next post, we are going to to find investigate the medians of a triangle.
A Personal Note

Although I prefer GeoGebra over GSP, and despite the fact that I avoid creating many tutorials for commercial software, I’ll make an exception with GSP. I think it has done a lot to mathematics education for the last 30 years, and I have used it extensively before I discovered GeoGebra. I am only going to create one tutorial series with 10 tutorials.

I just hope that GSP will give more time to people to evaluate the new versions. The 20-minute preview for version 5.0 is a bit short. For that reason, I will just use version 4.07 in the GSP Essentials series.