This is the second part of the Introduction to Modular Systems Series. Please read the first part before proceeding.

Last Monday, we have learned a number system that uses numbers on the 12-hour analog clock. We have performed addition using these numbers and discovered that in that system, 12 behaves like 0. We have also observed that to add large numbers, we need to divide the number by 12 and get the remainder.

Recreating the table by replacing 12 with 0 gives us the second table in the figure above. As we can see, in this new number system, we have digits 0 through 11 as opposed 0 through 9 in the number system that we use everyday (the decimal number system).

In this new system, we have observed that there is a certain  number where numbers wrap around. The wrap around number is called the modulo. The modulo of our “clock number system” is 12, so we call it modulo 12.

In addition, we have discussed some sort of ”equivalent numbers.” These are numbers that equal a particular time when “reduced” to the numbers on the clock . For example, 23 is equal to 11 (that is 11 o’clock); the numbers 35, 47, 59, are all equivalent to 11.  If we continue the pattern, we can generalize that all numbers of the form

(k is a positive integer) is equal to 11. This set of numbers belong to

or numbers that give a remainder of 11 when divided by 12.

We use the symbol

to denote equivalence in a modular system. Two equivalent numbers are said to be congruent. So, we say 23 is congruent to 11 modulo 12 and write

Aside from the addition table, we can also dig dipper into the clock arithmetic by multiplying numbers in the clock number system. The resulting table of products can be quite interesting as shown below (try coloring the same numbers with the same color). 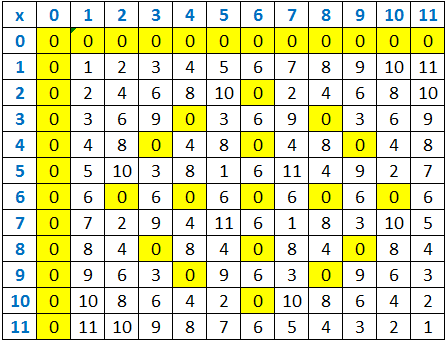 In the next post in this series, we will investigate the implications of the symbol