In the previous part of this series, we have discussed how mathematicians of the ancient times found clever ways to find the area of regions bounded by curves. We used this knowledge to generalize a way to solve the distance traveled by an accelerating car. In this post, we continue with the discussion of the second problem: How do we find the acceleration of the car at a particular instance? 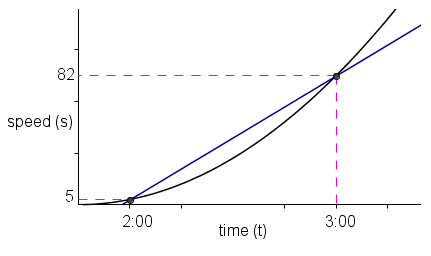 The question that we want to solve was how much was the car accelerating at exactly 2:30. Our hint in the first part of this series was the relationship between the acceleration of Car B and its graph. We discovered that the acceleration equals the slope of the line passing through two points on the graph.  Consequently, in solving the problem, we have to find the slope of the line passing through (2:30,s) where s is the speed of Car B at that particular instant. Now, there are infinitely many lines that can pass a single point, so  which line are we looking for?

Also, note that difference means subtracting two quantities, but our problem is we only have one time and one speed at 2:30, which means that we cannot use the formula. 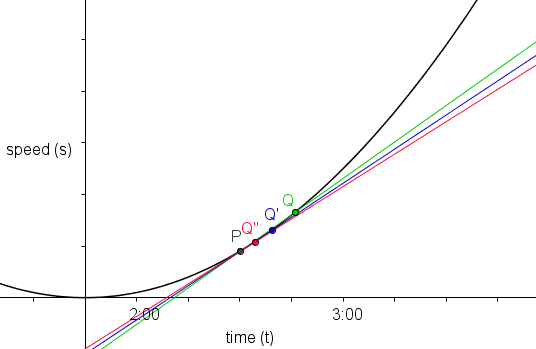 Technically, we say that the limit of the slope line PQ as Q approaches P is equal to the slope of the line tangent to the graph passing through P.

The problem above and the outline of its solution that you have read gave birth to Differential Calculus. I will not delve on the technical details of the solution because I have already discussed it in the Algebraic and Geometric Meaning of Derivative.

In this 3-part series, we have seen the connection between two concepts, limits and approximation. We have also discovered the connection between Differential and Integral Calculus. In addition, we have seen that some of the important development of mathematics came from the need to solve particular problems. The most important thing this lesson taught us is some problems are so important that solving them sometimes gives birth to new ideas or even new mathematics.