The Golden Ratio and the Perfect Human Face

Mathematical beauty ranges from simple Youtube embedding to the elegance of tessellations and symmetry all the way to the complexity of fractals.   In this post, we talk about the most interesting connection between beauty and mathematics, the mathematical beauty of the human face. 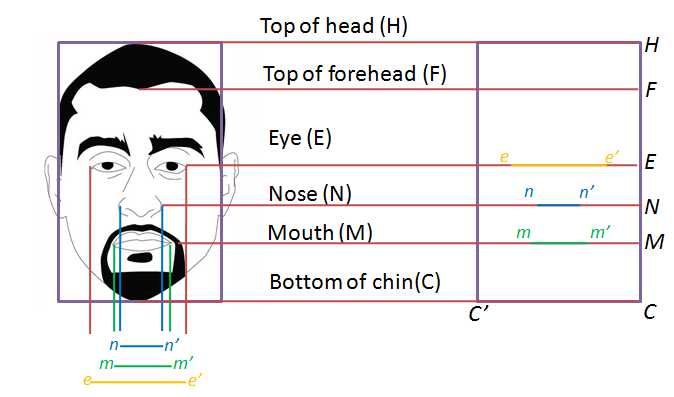 The Golden Ratio was used by architects, sculptors, and artists since the ancient times to express beauty in their work.  Architectures based on Golden Ratio are considered pleasing to the human eye. The Pyramid of Egypt, the Pantheon, and the United Nations Building are just several examples of structures in Golden Ratio.

and the shorter segment is

, the golden ratio is

, which mathematicians denoted with the Greek letter

In the diagram above,

CC’ = Width of the human face

ee’ = Distance between outsides of the eyes

nn’ = Distance between the outsides of the nostrils

mm’ = Distance between the ends of the mouths.

The perfect human face contains the Golden ratio. In particular,

Of course, that is just from the mathematical point of view. Beauty is too complicated to be defined by just a single formula.

Note: This article was originally published in The Mathematical Palette on August 13, 2012.