SSS Congruence Theorem and Its Proof

In this post, we are going to prove the SSS Congruence Theorem. Recall that the theorem states that if three corresponding sides of a triangle are congruent, then the two triangles are congruent.

Before proving the SSS Congruence theorem, we need to understand several concepts that are pre-requisite to its proof. These concepts are isometries particulary reflection and translation, properties of kites, and the transitive property of congruence. If you are familiar with these concepts, you can skip them and go directly to the proof.

In the figure below,

is slid to the right forming

. Clearly, when you side a figure, the size and shape are preserved, so clearly, the two triangles are congruent.

Sliding or translation is a form of isometry, a type of mapping that preserves distance.  In the isometry above, the preimage

is mapped onto  the image

A kite is a polygon with two distinct pairs of congruent sides. In the figure below,

is a kite with 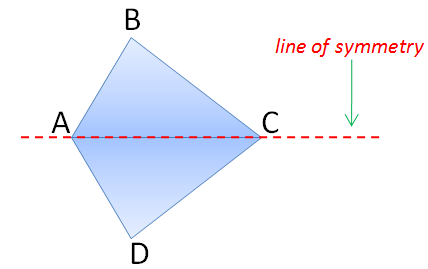 is a line of symmetry of the kite. This means that

. Mirroring an image or reflection preserves distance. This means that

congruent. Thus, we say that a kite is reflection-symmetric.

The Transitive Properties of Congruence

Let us recall the transitive property of equality of real numbers. It says that for any real numbers

. This is also true in congruence. For any figure

Now that we finished the prerequisite, we now prove the theorem.

In proving the theorem, we will use the transitive property of congruence. We show that if a third triangle exists, and

is congruent to it, then

is also congruent to it. Let the third triangle be

, there is an isometry that maps

. So, there is a triangle

which is an image of

that has a common side with 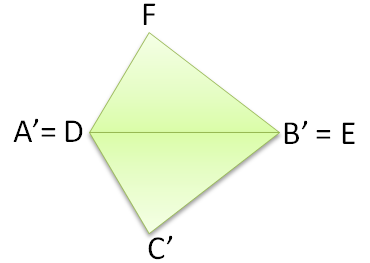 . By the transitive property of congruence,

form a kite. Since this kite is reflection-symmetric over line

is a reflection of

So, if the three pairs of sides of

can be mapped onto

by an isometry, by the definition of congruence,

. This prove the SSS Congruence Theorem.