Calculating The Value of Pi

We have met the number

or the approximation of pi (written as

) in our good old elementary school days. In fact, we have used it a countless number of times in mathematical computations. Most of us have used it when calculating the area of a circle or volume of a sphere, but only a few probably know that it appears in numerous branches of mathematics and even in other sciences. 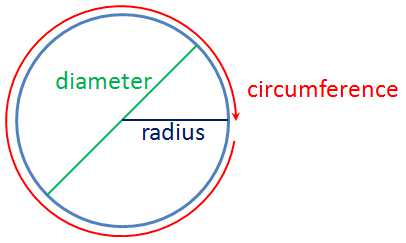 . What is amazing is that this is always true even if the circle is a big as a planet or as small as an atom.

Pi is an irrational number; it cannot be written as fraction. If you are wondering why you have seen it as fraction before in some books,

for instance, such values are only approximations.

Many mathematicians wanted a more accurate value of

.  Archimedes, for instance, inscribed and circumscribed polygons on a circle to find a more precise value. Since the circumference of a circle with diameter 1 unit is

, increasing the number of sides of the polygons will give a perimeter closer to the circumference.

in 250 BC, while the Chinese mathematician Lu Hui approximated it

up to 707 places, but his calculation was only up to 527 places correct.

Due to the invention of modern computers, the computation of

had been done electronically. In 1947, D. F. Ferguson calculated

up to 1120 places using a desktop calculator. In 1949, the first electronic computer ENIAC calculated

up to 2037 places. Since then, more precise values of

The latest calculation of

as of this writing was done by Alexander Yee and Shigeru Kondo. In 2011, after almost a year of electronic computation, they  calculated

up to 10 trillion digits.

References: The Story of Mathematics, Wikipedia