An Explanation Why the Line Multiplication Trick Works

Note: If you don’t know the trick, watch first the video below.

Now, let us learn why the line multiplication trick works.

Notice that if we actually draw the squares (see dashed lines above), we have 4 as the number of columns and 3 as the number of rows. This representation is the same as drawing vertical 4 vertical lines and 3 horizontal lines, and this time the product is the number of intersections. 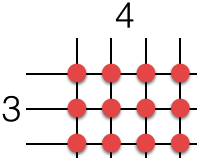 In the representation, the lines serve as the number of columns and rows and the intersections (red circles) “represent” the squares.

If we are going to represent multiplication of 2-digit numbers using the representations above, then we can make the following strategy. Since we are multiplying different digits, we will have different rectangles with various areas. But how many? Let us look at multiplying 23 and 12.

Let us see the connection between the multiplication algorithm and the figure. When we multiply 2-digit by 2-digit numbers, we do the following.

(1) Blue rectangle: get the product of the ones digit of both the multiplicand and the multiplier;

(3) Green rectangle: get the product of the tens digit of both the multiplicand and the multiplier.

Though I did not mention carrying over, it should be done whenever necessary. 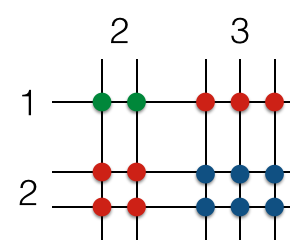 Watch the video below to learn more about the line multiplication trick.