The board is composed of 64 squares in alternating black and white just like the chessboard. The four basic mathematical operations are written on white squares as shown in Figure 1. Each square is identified by a (column, row) notation. The top-left square, for example, is in column 0 and row 7, so it is denoted by (0,7). 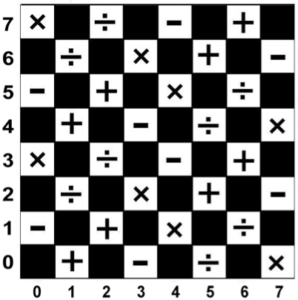 DaMath is played by two opposing players. In this article, we will refer to them as the Blue Player and Red Player. The players take turns in moving the pieces. 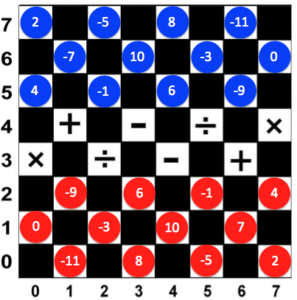 Figure 2 – The initial position of the pieces

The initial position of the pieces is shown in Figure 2. To start a DaMath game, a toss coin can be done to determine who will make the first move.

The pieces are moved by sliding forward diagonally to a vacant adjoining square. This means that you can only move the pieces to white squares. All movements have to be diagonally forward; backward movements can only be made when capturing pieces or can be made by using a dama. A dama (like a Queen in chess) can also move backward and capture pieces backward. We will discuss the movements of damas in another post.

Figure 3 – Position of the board after two moves

We summarize the movements of the two players. Take note that the notation below is written on the scorecard during tournaments and school competitions.

Capturing the Pieces and Scoring

We can see that the Red Player is ahead of points. The players can continue playing and add the obtained scores each time a piece is captured. The player with the higher points at the end of the game wins the game. 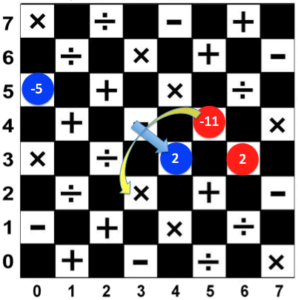 In the second part of this post, we are going to discuss capturing multiple pieces.