In my Introduction to Permutations post, we have learned that the number of permutations (or arrangements) of

at a time written as

, and we have also learned that the number of permutations of

at a time written as

In Figure 1, shown are the permutations of

at a time.  From the figure, we can see that there are indeed

of such arrangement. In Figure 2, shown are the permutations of

at a time, and we have shown that the number of permutations is equal to

.  In Figure 3, we have again listed the permutations of

at a time, and have shown that the number of permutations is equal to 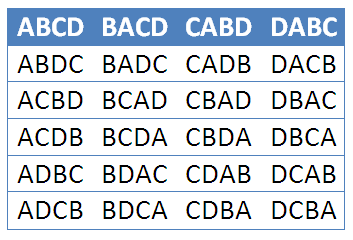 Figure 1 – Permutations of ABCD, taken 4 at a time. 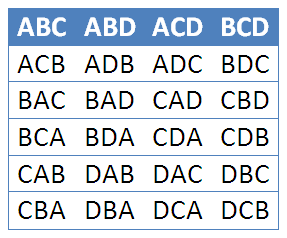 Figure 2 – Permutations of ABCD, taken 3 at a time.

Figure 3 – Permutations of ABCD, taken 2 at a time.

If we talk about combinations, however, the arrangement of objects does not matter. For example, if we want to buy a milk shake and we are allowed to choose to combine any

If we choose to shorten the name the fruits by selecting the first letter of their names, we only have

times instead of one.

In other words, a combination is just like a subgroup of a group. For instance, if we want to find the number of subgroups containing

objects (or the combination of

at a time), it is the same as asking  “how many possible groups of

objects can be taken from

objects?” In Figure 4, all the possible subgroups of

letters are displayed by the orange border. You also would have realized that the number of permutations is an overcounting of the number of combinations.

In Figure 2, ABC, ACB, BAC, BCA, CAB and CBA are permutations of Apples, Banana and Cherry. For each subgroup of

, we realized that we counted

times. So, to get the number of combinations, we divide our number of permutations

by the number of permutations of our subgroup

. Therefore, we can say that the number of combinations of

at a time is equal to

In general, to get the number of combinations of

at a time, we have to divide the number of permutations of

by the number of permutations of the subgroup

is usually denoted by

*Durian is a fruit which can be found in the Philippines. It looks like a jackfruit.

Unless a proof problem is already given, finding mathematical statements to prove requires us to see patterns, generalize, and make conjectures about them. The problem stated above about consecutive integers does not require us to reason much or generalize at all.

The success of proof writing requires intuition, mathematical maturity, and experience. Contrary to mathematical proofs written in books, the ideas behind arriving at a proof are not “cut and dried” and elegant.  Mathematicians do not reveal the process they go through, or the ideas behind their proofs. This is also a skill that mathematicians and persons who are good in mathematics possess: they are able to read proofs. The skills of reading proofs may be achieved by learning how to write them.

Proving in higher mathematics, on the other hand, requires formal training. For instance, we have to know how to use logical connectives like and, or, not, and must understand how conditional and biconditional connectives work. Basic set theory concepts are also important. Moreover, we also have to learn proof strategies like direct proof and proof by contradiction to name some.

For now, we will not be discussing these things . Most of the proofs in basic mathematics only require a little intuition and good reasoning.

In the tutorial below, I tried to recreate (amateurishly) the process on how mathematicians see patterns, arrive at a conjecture, and how they prove their conjectures.  Of course, in reality, problems mathematicians encounter are a lot harder. In fact, some of the hardest problems take hundreds of years to be solved. For example, no mathematician has proved the Fermat’s Last Theorem for more than 300 years, and the mathematician who proved it solved it for eight years.

The proof that we are about to do below is very elementary. For now, we will highlight the process and not the difficulty. The titles of the processes below are not necessarily in order.

From here, we might be tempted to say that if we add two integers, then their sum would always be even.  In mathematics, this kind of statement or hypothesis is called a conjecture: an educated and reasonable guess based on patterns observed. Rewriting our guess, we have

Conjecture: The sum of two even integers is always even.

If we want to disprove a conjecture, we only need one counterexample — an example that can make the conjecture false. (Can you think of one?). Note that  we only need one counterexample to disprove a conjecture.  If we want to prove it, however, we might be tempted to pair a few more integers and say that “oh, their sum is even, so it must be true”. No matter how many integers we pair, if we can’t exhaust all the pairs, then it cannot be considered as a proof.  When we say the sum of two even integers above, we mean ALL even integers.  Of course, there is no way that we can list all pairs of even integers since there are infinitely many of them.

Since it is impossible to enumerate all pairs of even integers, we need a representation, algebraic expression in particular, that will represent any even integer. If we can find this expression, then all the even integers would be represented. This process is called generalizing.  Like what we have done above, we generalized by representing all members of the set by a single expression. In our case, the members of our set are all even integers.

From the definition, we know that all even integers are divisible by 2. That means that if m is an even integer, then, when we divide m by 2, we can find a quotient which is also an integer. For instance, since 18 is an integer, we are sure that there exists an integer such that 18 divided by 2 is equal to that integer.

In general, suppose that quotient of m/2 is q, then it follows that m/2 = q, for any even integer m. Multiplying both sides of the equation by 2, we have m = 2q. That means that if m is an even integer, then there exists an integer q such that m = 2q. Hence, we may represent any even integer m with 2q for some integer q*. Note that q here is a generalized number, which means that an even integer can also be represented by 2x, 2y, 2z or any variable with the condition that they are integers.

Proving is making logical and relevant statements from definitions, facts, assumptions and other theorems to come to a desired conclusion. Before coming up with an elegant proof, mathematicians usually have scratch work, connecting their ideas to arrive at what they want to prove.

From the statement above, we have shown that any even integer m, there exists an integer q, such that m = 2q. That means, that if we can show that the sum of two even integers is in the form 2q (or that the sum is divisible by 2), then we can be sure that it is always an even integer.

Here, we write our proof in a shorter and more elegant way. Conjectures that are proven are called theorems. So let us write the proof of our first theorem.

Theorem 1: The sum of two even integers is always even.

Most proofs are written in a concise way, leaving some details for the reader to fill in. For example, the statement “Since q + r is an integer” did not really state the reason why this is so. This is stated in our scratch work, but not in the proof.

Theorem 2: The sum of two odd integers is always even.

Being good in math requires hard work. Andrew Wiles worked on the Fermat’s Last Theorem for seven years, have given up several times thinking that it was impossible. In 1995, he finally thought he had proved it, and presented it in a conference.  A month later, his reviewer thought that there is a part of the proof which was vague (or wrong), so he had to review his work and found out that there was a part which was actually wrong.  He almost gave up. He worked more than a year to correct the error.

Now, he has carved his place in history.

*In technical language, the word “for some” is equivalent to the word “there exists”.

An Intuitive Introduction to Limits

Limits is one of the most fundamental concepts of calculus. The foundation of calculus was not entirely solid during the time of Leibniz and Newton, but later developments on the concept, particularly the

definition by Cauchy, Weierstrass and other mathematicians established its firm foundation. In the discussion below, I shall introduce the concept of limits intuitively as it appears in common problems. For a more rigorous discussion, you can read the post article titled “An extensive explanation about the

Figure 1 – As the number of side of the polygons increases, its perimeter gets closer to the circumference of the circle.

be the number of sides of the inscribed polygon,

be the perimeter of a polygon with

be the circumference of the circle, we can say that the limit of

. Compactly, we can write

-plane, we arrive at the table and the graph in Figure 2.

First, we see that as the value of

increases, the value of

. Furthermore, we can make the value of

as we please by choosing a sufficiently large

. We also notice that no matter how large the value of

is, the value of

Hence, we say that the limit of

as the value of

increases without bound is equal to

, or equivalently the limit of

approaches infinity is equal to

. In symbol, we write the limit of

or more compactly the

Recall that the slope of a line is its “rise” over its “run”. The formula of slope

of a line is

, given two points with coordinates

.  One of the famous ancient problems in mathematics was the tangent problem, which is getting the slope of a line tangent to a function at a point.  In the Figure 3, line

is tangent to the function 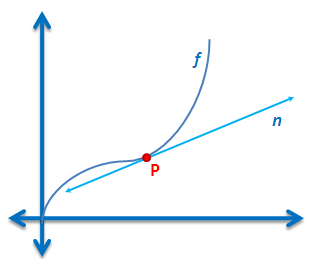 Figure 3 – Line n is tangent to the function f at point P.

If we are going to compute for the slope of the line tangent line, we have a big problem because we only have one point, and the slope formula requires two points.  To deal with this problem, we select a point

on the graph of

along the graph of

is getting closer and closer to 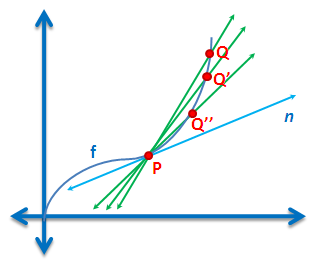 be the distance between the x-coordinates of

be the slope of the secant line

is equal to the slope of the tangent line. Concisely, we can write

be the area under the curve,

be the sum of the areas of

rectangles, then we can say that the limit of

as n approaches infinity is equal to

. Concisely, we can write

We end with a more familiar example usually found in books. What if we want to find the limit of

To answer the question, we must find the value

is very close to

. Those values would be numbers that are very close to

– some slightly greater than

and some slightly less than

. Place the  values in a table we have

From the table, we can clearly see that as the value of

.  Concisely, we can write the

Mr. Jayson Dyer, author of The Number Warrior has another excellent explanation on the concept of limits in his blog Five intuitive approaches to teaching the infinitely small.

The area under the curve problem and the tangent problem are the ancient problems which gave birth to calculus. Calculus was independently invented by Gottfried Leibniz and Isaac Newton in the 17th century.