In this post, I’ll give you some interesting examples of such numbers. END_OF_DOCUMENT_TOKEN_TO_BE_REPLACED

How Old Was Diophantus?

Diophantus was a Greek mathematician and the author of Arithmetica.  He is famous for his Diophantine equations which eventually inspired Fermat to propose the Fermat’s Last Theorem. Little is known about him, and much of knowledge of his life is derived from a 5th century Greek anthology of games and puzzles.  One of this puzzles is known as his epitaph.

‘Here lies Diophantus,’ the wonder behold.
Through art algebraic, the stone tells how old:
‘God gave him his boyhood one-sixth of his life,
One twelfth more as youth while whiskers grew rife;
And then yet one-seventh ere marriage begun;
In five years there came a bouncing new son.
Alas, the dear child of master and sage
After attaining half the measure of his father’s life chill fate took him.
After consoling his fate by the science of numbers for four years, he ended his life.’

This means that Diophantus lived 1/6th of his life as youth, and then grew a beard after 1/12th of his life.  He married after 1/7th more of his life, and had a son five years later. His son lived as long as him, and Diophantus died four years after his son’s death.

Can you determine the age of Diophantus when he died?

Sometimes, mathematics appears in places that we sometimes least expect it to be — like in dancing. 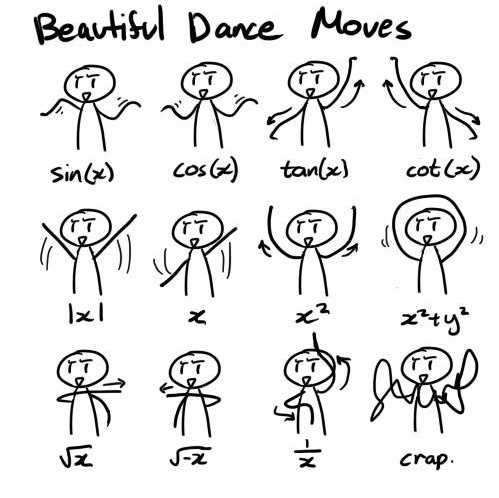 The full article with video about Math Dance can be read here.

Image Source: Unknown (please inform me about its origin if you know).