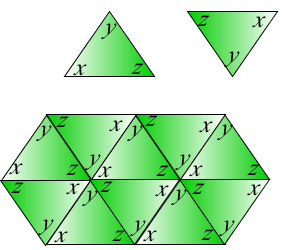 Using the three figures above, we can prove the following.  END_OF_DOCUMENT_TOKEN_TO_BE_REPLACED

Discovering properties of angles of parallelograms

Consider the parallelogram below. We mark the bottom-left angle with a and the bottom-right angle with b to denote their measures as shown in Figure 1.

We create another parallelogram with same size and the shame shape, but of different color. We place the two parallelograms side by side as shown in Figure 2. The angles a and b is a linear pair; therefore, (1) a  + b = 180˚