Introduction to the DaMath Board Game Part 3

This is the third part of our series on learning how to play Damath. In the first part, we learned about the basics of Damath and in the second part, we learned how to capture multiple pieces.

A piece can be promoted when it reaches the last row (the first row of the opponent’s area) on the board. In the next figure, if it is the Red Player’s turn, then he can promote 2 by moving it to (6,7) as indicated by the arrow. In the same way, the Blue Player’s 8 is just two moves away from being promoted. Promoted pieces are called dama (roughly equivalent of Queen in chess). Each player can have more than one dama. 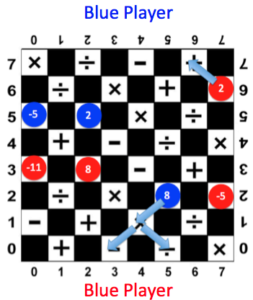 The dama can move forward and backward on unobstructed diagonals. For example, if the Red Player’s 2 becomes a dama on (6,7) as shown in the next figure, it can move to any of the four squares indicated by the red lines. It cannot move to (1,2) and (0,1) because 8 is obstructing the path.  END_OF_DOCUMENT_TOKEN_TO_BE_REPLACED

The board is composed of 64 squares in alternating black and white just like the chessboard. The four basic mathematical operations are written on white squares as shown in Figure 1. Each square is identified by a (column, row) notation. The top-left square, for example, is in column 0 and row 7, so it is denoted by (0,7).  END_OF_DOCUMENT_TOKEN_TO_BE_REPLACED