A Simple Proof of the Arithmetic Mean Geometric Mean Inequality

Last February, we have used area to prove the Arithmetic Mean – Geometric Mean Inequality (AM-GM Inequality). In this post, we show a simpler proof. 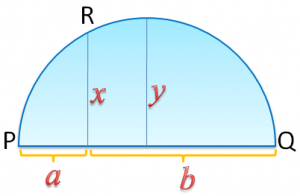 Another Proof of the Sum of the First n Positive Integers

positive integers at a very young age in a few minutes. We generalized his method and have also seen the link between the sum and the area of a triangle. In both discussions, we have shown that the sum of the first 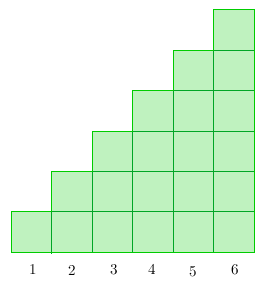 In this post, we discuss another geometric proof of the problem above.  We start with a specific case adding the first

positive integers, and the proceed to the general case.

We can add the first

positive integers manually or just by counting the number of unit squares in the figure above. The figure shows the geometric representation of the sum of the first 6 positive integers. Adding manually is not difficult if the given is small. However, we need a strategy for larger numbers. END_OF_DOCUMENT_TOKEN_TO_BE_REPLACED