How do we locate irrational numbers on the number line?

The question above is equivalent to: “How do we construct a segment with irrational lengths?”

It is easy to locate some irrational numbers on the number line even with compass and straightedge construction. The irrational

can be located by constructing square ABCD (Figure 1), getting the diagonal AC, and constructing a circle with radius AC. It follows that the length of AE is

, and the coordinates point E are 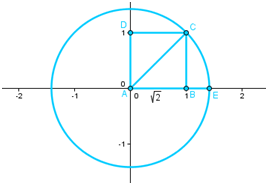 It is also apparent that the easiest way to construct segments with irrational lengths is by  constructing diagonals of rectangles.  In Figure 2, OB, OC and OD have lengths

for instance, which is the length of EH. 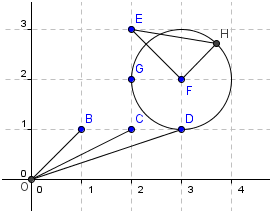 Exercise: Explain why the length of EH is equal to

Algebraically, if we let

be the diagonal of the square ABCD in Figure 1, then by the Pythagorean Theorem, we get

, which is equivalent to

. Now, note that getting the value of

is the same as getting the root of the function

. Therefore, it is possible to locate an irrational number on the number line by getting the root of a function, or, equivalently, graphing function and finding its x-intercept.  The following is an example:

Suppose we want to locate the position of the irrational number

on the number line. Here’s what we should do: First let

. Multiplying both sides by

. Now, squaring both sides we have

.  Now, if we locate the the positive root of

, we now locate the coordinates of

; thus, we now know the length

Exercise: Give the equation of the function with root

There is one thing that we can observe about the polynomial

above. The numerical coefficients of the terms are integers.  Irrational numbers that can be generated as roots of polynomials with integral –rational to be exact — coefficients are called algebraic numbers; those which cannot be are called transcendental numbers.

Geometrically, it is impossible to construct “transcendental lengths” using compass and straightedge.

We will talk about algebraic and transcendental numbers in the future.