We have learned about angle measures since elementary grades.  In Figure 1, we have a circle with center A, and radius length 1. Angle CAB measures 90 degrees and intercepting minor arc BC.  This is also the same as saying that arc BC is subtending angle CAB. We have also learned  that the entire rotation about the center of a circle is 360 degrees. 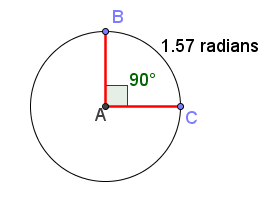 Another unit of angle measure besides degree is radian. Now, what is radian? How is it related to degree?

Consider the second figure shown below. Segment OP is the radius of the circle with center O, and NP is the arc subtending angle NOP. If NP is a string that wraps the portion of a circle, if we “straightened” it and its length equals the length of OP, then we say that angle NOP is equal to one radian. Therefore,

One radian is equal to the angle measure at the center of a circle subtended by an arc equal in length to the radius. 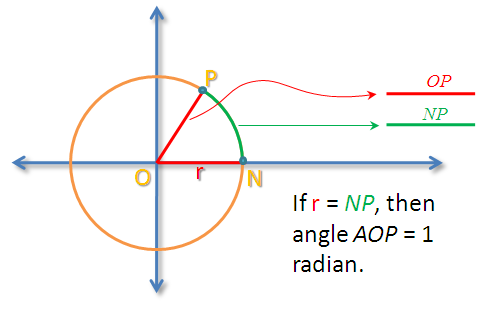 If the length of NP = r, then how many radians is the entire rotation of point P about the center O?

Now, the ratio above is the same as

. This means that the entire rotation about the circle is equal to

We have mentioned that the rotation about the center of a circle is 360 degrees. Therefore,

degrees.  These are the only equations that we should remember especially when converting degree to radian measure and vice versa.

To give us a feel of the worth of our discussion above, let us have a few examples on degree-radian conversions. We will use ratio and proportion to convert degrees to radian and vice versa.

Solution: We go back to what we know:

Solution: Let y be the measure of

in radians.  Again, using ratio and proportion, we have

As you can see, you don’t really have to memorize which to multiply,

Of course, we can generalize the situation above.  For instance

is the given degree measure. Solving we have

. That’s the reason why you multiply the degree measure by

when converting degree to radian measure. But as I have said earlier, no need to memorize. Just use ratio and proportion.

Exercise: Show the derivation of converting radian to degree measure.