The Seven Bridges of Königsberg

The city of  Königsberg, Prussia (now Kaliningrad, Russia) was set on both sides of the Pregel river.  There were two islands on the river and there were seven bridges connecting them and the main land as shown in Figure 1.

Residents observed that using the bridge at the southern part of the city (Bridge 1 in Figure 2) as starting point, they could not stroll around crossing all the bridges only once. They had to skip one bridge or cross some bridges twice. Some of them conjectured that it was impossible to cross the seven bridges once and only once, but they could not explain why.

The problem was submitted to the great  Leonard Euler, one of the most famous mathematicians that time.  Euler proved that there was no solution to the problem; that is, there was no way to cross the seven bridges exactly once. 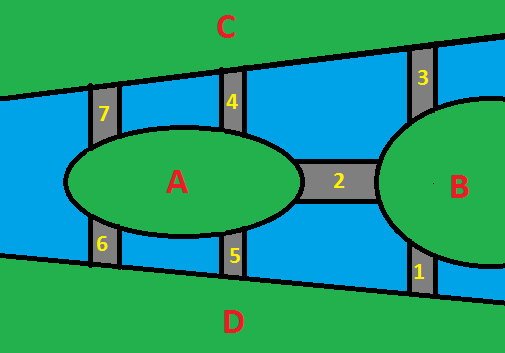 Since island B is less complicated, we will discuss it first.

Case 1: Starting OFF Island B

Theorem 1: If we started OFF  island B, we would end ON island B.

Case 2: Starting OFF Island A

Theorem 2: If we started OFF  island A, we would end ON  island A.

Back to the Problem

As the problem requires, our starting point is D, using bridge 1 to enter island B. But using this condition implies that we will both satisfy  Case 1 and Case 2 (Can you see why?). But we cannot end up ON island A and ON island B at the same time. Therefore, crossing the seven bridges exactly once is impossible.

The problem and the proof above resulted to a new kind of mathematics we now call graph theory. Graph theory has a lot of applications in computer science particularly in web and network technology.