This is the second part of the GeoGebra 4.2 Sneak Peek Series. In this post, we discuss the changes made in the Object Properties window and the significant changes on the properties of the commonly used tools in GeoGebra.

The Object Properties in version 4.2 is included in the References dialog box as shown in the figure above.  The Object Properties contains  properties of mathematical objects divided into tabs: Color, Style, Advanced and Scripting tabs common to most  objects. It also contains special tabs for such as Algebra for points and Decoration for angles and segments.

The most apparent upgrade in the Object Properties window is the Color tab which has now a larger and sharper color choices on the color palette. In addition, the new color palette allows RGB mixing of colors using sliders. The sliders can be displayed by clicking the + button below Other palette. Further, GeoGebra 4.2 now supports foreground and background text colors as shown in the second figure.

The Text Tool and More

The Text tool size which was very hard to handle in version 4.0 and earlier versions has now a Custom size in terms of percent. In effect, it is now easier to customize text sizes. 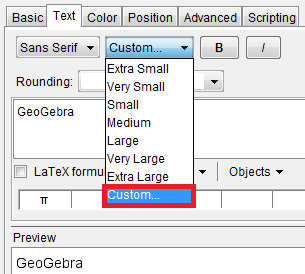 Closed figures such as polygons can also have different Hatch and Image fills in the Style tab. This feature was already included in GeoGebra 4.0 but I have never mentioned it in the GeoGebra 4.0 Sneak Peek Series.