Why The Addition Number Trick Works

In the Addition Number Trick, my latest post in the Mathematical Palette (sorry, this site is already gone), I shared about a number trick I learned when I was still in the elementary school. The trick involves (1) letting a friend write a number  and then (2) predicting the sum of the five numbers, including the four numbers (3 – 6) that you are about to write in alternate.  The order of writing is indicated by the circled numbers in the figure below. 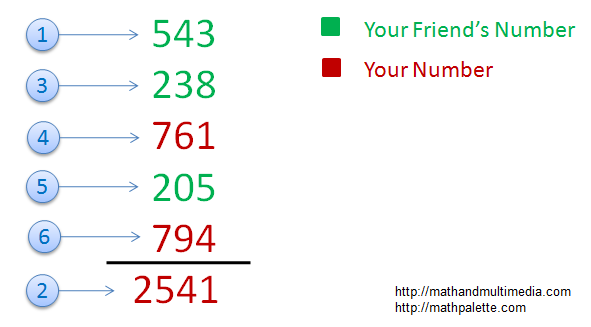 To get the sum of the five numbers, subtract 2 from the first number and then affix it to the leftmost part (543 becomes 2541).  Next, your friend and you will write the numbers in alternate, and you should make sure that each digit on the same place value add up to 9 (see detailed instructions). After adding the numbers, the sum should be correct.

Why The Number Trick Works

From the figure, we see the following pattern.

There is another variation to this number trick, but I will leave it as an exercise.  Will the trick work if