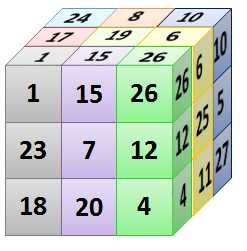 The second figure shows the disassembled magic cube. As you can see, the sum of the rows and columns is indeed

In the third figure, we can also see that the sum of all the space diagonals is also

. Use the second  figure to check the other sums.

For those who are interested in Magic Cubes, read Magic Cube with Durer’s square.