In this post, I’ll give you some interesting examples of such numbers.

The number 13 is believed by many to be unlucky. Up to this day, there are many buildings that have no 13th floor. In fact, there is even a term for fear of number 13. It’s called triskaidekaphobia!

The Number of the Beast

In Christianity, the number 666 is forbidden to be used and feared because it is said to be the number of the devil. During the early times, the possession of the magic square whose sum is 666 (see figure below) could get you in a lot of trouble. You guessed it right, during those times a magic square could get you to be burned at stake if you are not so lucky. 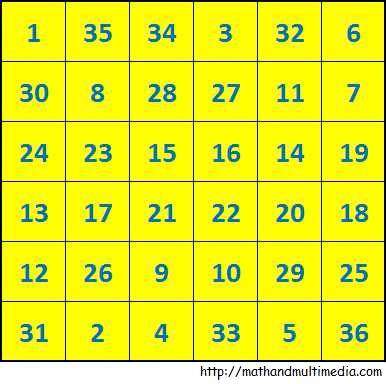 In the US, there are hexadecimal numbers that are technically illegal to publish since they can be used to decrypt DVDs. The Advance Access Content System (AACS) claims to have a copyright to these numbers. It was leaked however and was published in more than 300,000 websites.

It should be noted that aside from the illegal, unlucky, and forbidden numbers above,  negative numbers,  complex numbers, and transfinite numbers were considered absurd by many during their infancy. However, these numbers stood the test of time and have proved to be useful both in pure and applied mathematics.

Reference: The Story of Mathematics: From Creating the Pyraminds to Exploring Infinity