Angles and the Hindu-Arabic Numerals

The image below has been circulating on the internet for quite a while. It shows that the number of angles on the numerals is equal to the value of the number. The number four, for instance, has four angles. 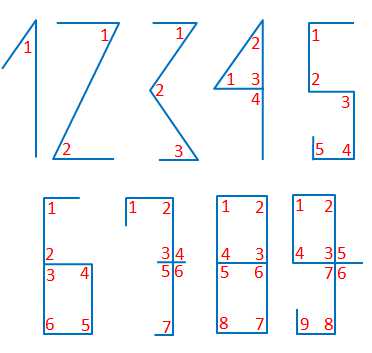 The image was not created without basis. During the infancy of the Hindu-Arabic numeral system, the way of writing numbers  that we use today, a system of counting angles as shown above was adopted. This was shortly after the release of two books namely On the Calculation with Hindu Numerals by al-Kwharizmi (about 825 AD) and On the Use of Indian Numerals by Abu Yusuf Yaqub Ibn Ishdaq al-Kindi (830 AD).  These two books popularized the use of Hindu-Arabic numerals in the Middle East.

As we all know, eventually the Hindu-Arabic way of writing numbers and computations replaced the Roman Numerals.

Reference: The Story of Mathematics: From Creating the Pyraminds to Exploring Infinity