The trisection angle problem states that given an angle

, use the compass and straightedge to construct rays

At first glance, the solution seems obvious. For instance, take

, we can show that angle

but these angles are not congruent to 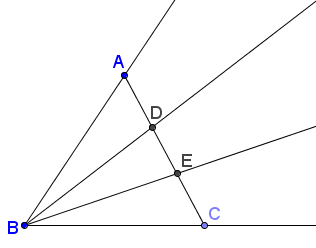 Mathematicians tried to make this construction, but it was proved by Pierre Wantzel (1837) to be impossible.

The cube problem was tied to Greek mythology. According to myth, a large number of people were dying at Delos (a city in Greece) so the Delians consulted the oracle at Delphi. The oracle told them that Apollo was displeased and wanted his cubical altar to be twice as large of the original one. The poor Greeks built another altar doubling each length of the altar only to find out that the volume was increased eight times. Hence, mathematicians search for ways in doubling a cube (its volume).

Doubling a cube is another construction problem which means that the only permitted instruments are the compass and straightedge. If Algebra was invented during that time, the Greeks would have lived longer since if the volume of the first cube is

, then the required volume is

then they needed the edge length of the altar to be

It was also proved in the modern time that this problem is impossible to solve.

Squaring the circle means given a circle, we want to construct a square of the same area using only compass and straightedge. It was proved by Ferdinand  von Lindemann in 1882 that the construction was impossible by proving that

is a transcendental number.

Today, the phrase “squaring the circle” means “to do the impossible.”