Another representation of rational numbers aside from fractions is the decimal form.  Every fraction has a decimal representation:

Notice that some of the fractions above are terminating, while the others are repeating decimals. The fractions

have only one decimal place, while

have infinitely many (Can you see why?). Now, given a  fraction, can we determine if it’s a terminating or non-terminating decimal without dividing?

First let us examine the characteristics of terminating decimals, say 0.125. The easiest way to convert this decimal into fraction is by dividing a whole number by a power of 10:

It is easy to see that all terminating decimals can be converted to a fraction of this form. Several examples are

From these representations, we are pretty confident that all terminating decimals can be expressed as 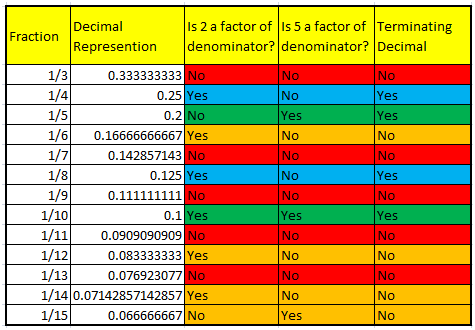 From the table above, we can observe the following:

From these observations, we can make the following conjecture:

In the next post, we will have more discussions and we will refine our conjecture.