Primo is a race towards the center of the board. Each player has two pawns (yes, chess pawns), and alternately rolls two 10-sided dice.   The four fundamental operations (addition, subtraction, multiplication, and division) can be applied to the numbers obtained from the roll to determine the movements of the pawns. The player who lands two pawns at 101 or the center of the board wins the game. 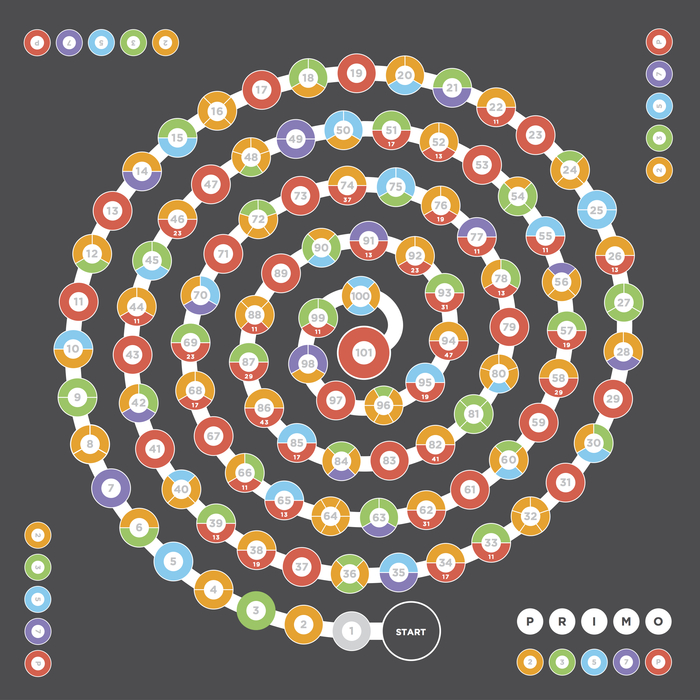 The game already looks exciting, but there are some more twists that make it really fun.  If you land on your opponent’s pawn, that pawn goes back to the starting point. In addition, if you land on red circles or prime numbers greater than 10, you get cards which could be good (or bad as well).

Primo uses color coding for the numbers on the circles. All prime numbers below 10 are “singular-colored circles” while composite numbers are composed of combinations of the colors of their corresponding factors. For example, 2 is orange and 3 is green, so 6 is a combination of orange and green because

. With this kind of graphics, players don’t only practice their arithmetic, they are also familiarized with prime factorization. Watch the 1-minute introduction video below to know more about the game.

Primo needs funding to create the first 1000 game kits. You can help the creators by donating to their Kickstarter project. The Kickstarter page also contains a more detailed introduction to the game.