Long ago, in a land far away, there was a grand hotel where there were infinitely many rooms. This hotel was attended by a brilliant manager.

One night, a guest arrived, but  the hotel was full — each room was occupied by one guest. The newly arrived guest asked if a spare room was available. “Of course we have, we are the Infinite Grand Hotel. There is always a room for everyone,” the manager said proudly. 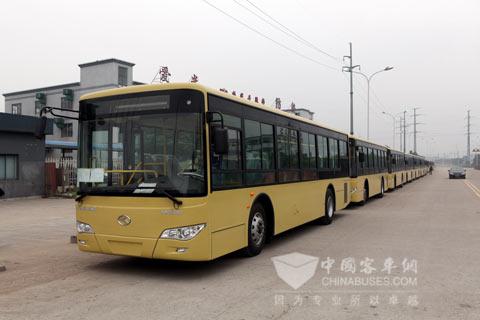 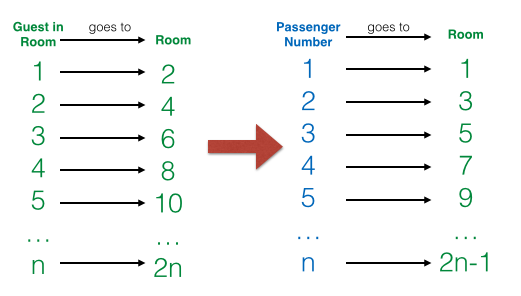 After everybody had moved, the manager assigned every passenger to the odd numbered rooms. He assigned Passenger 1 to Room 1, Passenger 2 to Room 3, Passenger 3 to Room 5, and Passenger n to Room 2n – 1. Since there are countably infinitely many odd numbers, and countably infinitely many rooms (see diagram above), the passengers can be assigned in one-to-one correspondence with the odd-numbered rooms. There was no problem of moving in, there’s always a room for everyone. Everybody had a room and everybody was happy. The manager was happy.

Infinite Buses, Each with Infinite Number of Passengers

After a little bit of thought, the manager remembered from his math class that there are infinitely many primes. So, he thought that he could assign each bus to a prime number; he cleverly made the following room assignment scheme.

1.) He assigned all the guests in the hotel to the prime number 2. Then, he told the guest in Room 1 to move to Room

or Room 8, and every guest in Room

to move to Room 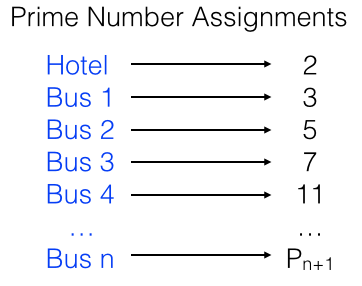 The manager was NOT happy.

After all the brilliant schemes that he had done, the manager realized that he had a gift in mathematics.  He quit his job and became a mathematician (Just kidding).

The problem above is called The Hilbert’s Grand Hotel Paradox. It was created by David Hilbert to illustrate the counterintuitive properties of infinite sets.

In the next post, I will discuss the mathematics involved in this brilliant problem. So, keep posted.