Problem: Find the greatest common factor of 15 and 40 using the Euclidean Algorithm.

We can think about 15 and 40 as lengths of two ropes in meters. If we want to cut the ropes into shorter pieces with equal lengths, we want to maximize such that no part of the ropes will be wasted. With this condition, the longest possible length of each cut piece is the greatest common factor of 15 and 40.

Problem: Find the longest possible length that a 15m and a 40m rope cut into shorter pieces with equal lengths such that no part of the rope will be wasted. 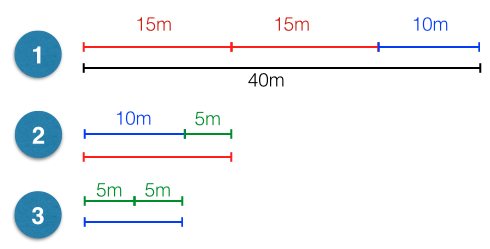 Therefore,we can cut both the ropes into 5 meters and get eleven 5-meter ropes combined.

In advanced high school mathematics and university textbooks, you will see the method above written differently. For those who majored in mathematics will probably remember the algorithm below. That is, the repeated

is the quotient, and

is the number of steps (or division) in the algorithm. Using this method, the problem above has the following solution.

So, the remainder before

is the greatest common factor of the two numbers.