I studied in Japan in a Teacher Training Program for one and a half years. A 4-month intensive Japanese language course was included in this program, so I was really lucky since I wanted to learn Japanese. Like many of you, I was a fan of Japanese anime since I was a kid.

For the first four months in the program, I, together with other international students, studied Japanese 5 hours a day, 5 days a week. We learned grammar, listening, speaking, and writing. As you probably know, writing is the hardest part since Japan uses a different writing system. They use three sets of characters namely, Hiragana, Katakana, Kanji, and they also know our alphabet. After graduating high school, Japanese students should master 46 Hiragana, 46 Katakana, and 2136 Kanji characters.

In our case, after four months of training, we learned around 400 Kanji characters. Although I had the chance to continue our Japanese language studies, I did not. I focused on my research and studied Japanese on my own.

To continue learning Japanese, I studied our textbooks. We used Situational Functional Japanese (Volumes 1-3) and we finished Volume 2 in our course. It was not difficult to read the third volume. In learning Kanji, we used Kanji Book 1 in the course. I continued reading Book 2 on my own.

Another opportunity to learn Japanese came when we were tasked to translate textbooks. I, together with three other international students translated Grade school mathematics textbooks from Japanese to English. This was supposed to be a very difficult task for us with our limited Japanese, but the previous editions of the books had English translations, so they really helped a lot. Of course, most parts of the books were retained and we had only to toil with the new parts. The textbooks have 2 Volumes from Grades 2 to 6, and I translated Grade 2 Volume 1, Grade 3 Volume 2, and Grade 4 Volume 2.

I found out that the Japanese textbooks are really good and I was amazed how they developed concepts. I have read textbooks from many English speaking countries, but there was nothing like it. So I added to my goal that I want to learn Japanese in order to read Japanese mathematics textbooks. Due to this reason, I bought the complete set of the previous edition of the textbooks that I was translating, both the Japanese and English editions. I also bought middle school and high school textbooks with English translations.

During the last months of my program (January to March 2015), I was included in the team who edited the finished English editions, so there was no time to learn more Japanese. When I came back to the Philippines in late March 2015, I started reading the Japanese mathematics textbooks from Grade 1 in order to know how mathematical concepts are developed from early Grades and in order to memorize the Kanji as Japanese students learn them from early Grades. As of this writing, I am reading Grade 4 Volume 2. I am expecting to finish Grade 6 before the year ends.

There are several advantages in reading the textbooks from the early Grades. First, the grammar develops from the simplest and getting more complex as you go to higher grades. This enabled me to see patterns of the grammatical structure, things that I didn’t learn in my course. The vocabulary also gradually develops.

The more resources you have the better. Every book has its own style of teaching. The resources below are some that I used and I found them very useful. 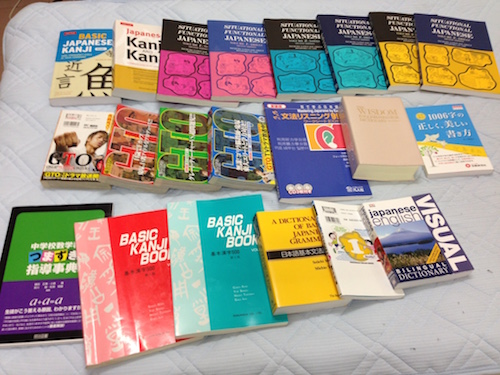 These textbooks are very helpful; however, you need to have some basic Japanese if you want to use them. They are designed for classroom use and hence teachers are needed. If you can read basic Hiragana and a hundred Kanji, then you can read these books. Each volume is divided into two books: Notes and Drills. The Notes contains the explanation to grammar while the Drills are used for grammar exercises and conversation drills. Note that after Lesson 4, there are no more Romaji used.

These are good textbooks for learning Kanji. They have the writing and reading exercises.

This is an app that lets you read Kanji on your phone. You just have to focus your camera on the Kanji and Yomiwa will read it for you and give you the meaning.

I recommend this 100%. This is a Japanese – English and an English-Japanese dictionary. Aside from the meaning, it has sample sentences on how to use the words. It is also very good at recognizing Kanji writing. You write the Kanji on the screen of your phone, and it will identify it for you.

I also bought a 10-volume Doraemon bilingual (Japanese and English) manga. It can also help build your vocabulary and learn conversational Japanese.

Kanji reading and writing exercises. I tried to search for Volume 2, but it looks like it has not been written/published yet.