How to Add Integers Using the Number Line

The last movement stopped at

. This is the same as moving 7 units  to the right of 0 which means that

So, what is the rule in adding two positive integers? 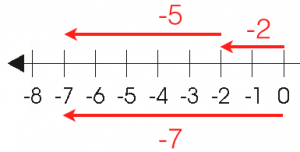 The movement stopped at

. This is the same as moving 7 units to the left. This means that

So, what is the rule in adding two negative integers?

From 0, we move 4 units to the left and from where it stopped, we move 2 units the the right.

Using this method, it is easy to visualize if the sum of an addition problem is positive or negative. For example, in the addition

In adding integers with more than two addends, it is sometimes easier to add the integers with the same sign first, then perform the final addition using two addends. For example, if we have