The Algebra and Geometry of Square Root

. From the discussion above, we now know that

It is easy to see that

The square root of the two numbers above are integers, but this is not always the case. For instance,

is clearly not an integer since

is somewhere between 1 and 4. What about

If we want to find the lengths 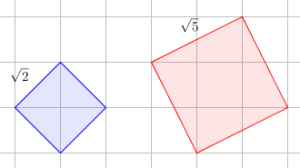 We can relate the discussion above to the equation

since getting the value of

requires calculating the square roots of both sides. Notice that for

, we get a parabola. Let the y coordinate of the graph be

, then there are two possible x coordinates, which are

. On the contrary, it should be noted that the square of a number is always positive, so we cannot get the square root of a negative number**. 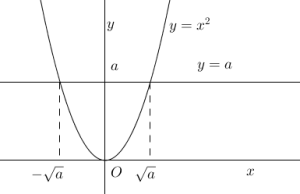 Figure 3 – The graph shows that a positive number has two square roots, one positive and one negative.

The larger the square, the longer its side, so it also follows that for positive numbers a and b, if

. In addition, the longer the side of a square, the larger it is, so we can also say that if 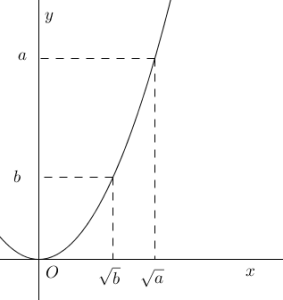 The preceding relationship is illustrated in the graph of

is at the right of

on the x axis (that is

on the y-axis which means

means approximately equal to.
** Negative numbers have square roots, but they are not real numbers. We call them imaginary numbers.