This is the 19th tutorial of the GeoGebra Intermediate Tutorial Series. If this is your first time to use GeoGebra, you might want to read first the GeoGebra Essentials Series.

A spreadsheet is a program that can be used to organize data in tables and  perform mathematical computations. Recently, GeoGebra integrated spreadsheet in its graphical user interface. In this tutorial, we learn how to use the GeoGebra spreadsheet. 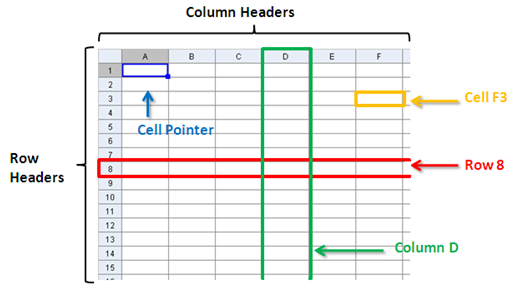 The figure above shows the different parts of a spreadsheet.  The following are the descriptions. You should familiarize yourself with these terms because we are going to use them in this tutorial and the two more tutorials to come.

If you want to follow this tutorial step-by-step, you can open the GeoGebra window in your browser by clicking here.  You can view the output of this tutorial here.

Note: It is important to place double quotes on both sides of the text you want write. Typing a single letter may be misinterpreted by the spreadsheet. For example, if you type x without double quotes, the spreadsheet will read it as y = f(x) and GeoGebra will graph the said function.