Platonic Solids: Why only five of them? 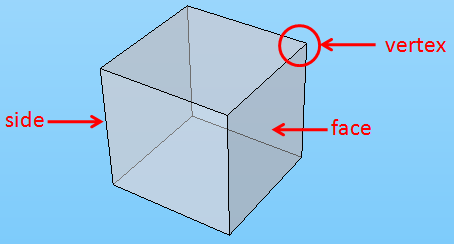 Regular polyhedra are also known as Platonic solids — named after the Greek philosopher and mathematician Plato. The Greeks studied Platonic solids extensively, and they even associated them with the four classic elements: cube for earth, octahedron for air, icosahedron for water, and tetrahedron for fire.

There Are Only Five Platonic Solids

Interestingly, even though  we can create infinitely many regular polygons, there are only five regular polyhedra. And the proof is fairly easy. Before we discuss the proof, let us familiarize ourselves with the different terms which we will use in the proof.

be the number of sides of a regular polygon on a Platonic solid, and

be the number of polygons meeting at each vertex. Let us represent each regular polygon with

. For example, a cube maybe represented as

since the faces of a cube (the squares) have four sides, and three squares meet at a cube’s vertex.

is convex, the sum of the angles at one vertex is less than 360 degrees (Can you see why?). Therefore, we can setup the following inequality:

It is clear that the values of

must be both greater  than

, the only possible values for

.  These values give us the solids

, then, we have only

cannot be greater than

since it will not satisfy the inequality.

Therefore, the only platonic solids are

. Hence, there are only five platonic solids, and we are done with our proof.