If we have two points, what will happen if we add their coordinates? If point

. It seems that there is nothing special about these points, but let us look at their position in the Cartesian coordinates. 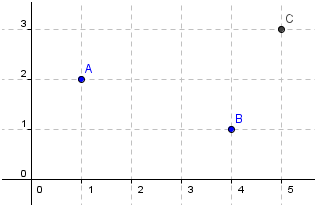 To test further our observation above, we use GeoGebra to plot the two points and automatically produce the ‘sum point.’ 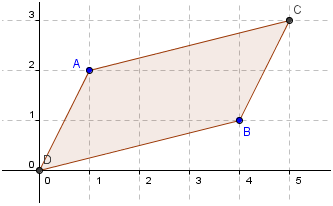 We now prove our conjecture above.

Theorem:  If you add the coordinates of two points

, and construct another point

, then three points form a parallelogram containing the origin as its fourth vertex.

Proof: Let the coordinates of

respectively. Then the coordinates of

be the point at the origin. We have to show that 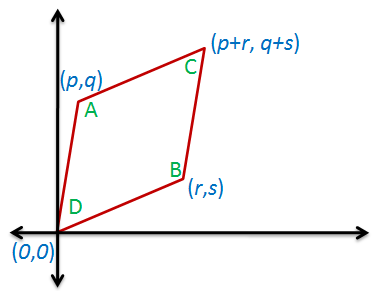 There are several ways to prove this, but it is sufficient to show that the opposite sides of the

are parallel; that is,

We now compute the slopes

of each side of the parallelogram.

As we can see, the slopes of

are equal, which means that they are parallel.  Also,  the slopes of

are equal, which means that they are also parallel. Therefore,

Note that the parallelogram method above can also represent addition of vectors.