The mystery of 495 explained

In yesterday’s post, we chose a three digit positive integer and we arranged the digits in ascending and descending order forming the largest and the smallest integer that can be formed using the three digits. We subtracted the smaller integer from the larger, and repeated the process several times. We  ended up with 495. We tried other integers and repeated the process, and they all ended up with 495.  In this post, we are going to discuss the reason behind our observation.

Let’s take the first example in yesterday’s post. We chose 592. Arranging the numbers in descending and ascending order, we got 259 and 952. Subtracting the numbers, we got 693. 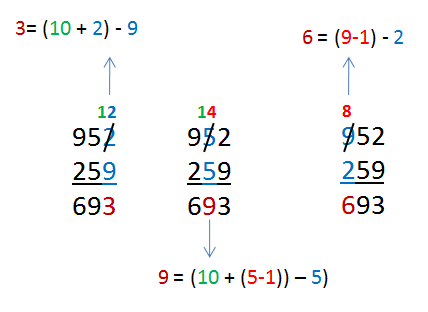 Let us examine closely what happens when we subtract the numbers with rearranged digits (examine the figure above):

The generalization of the subtraction process is shown below. If the digits of the numbers are represented by x, y, and z, where x>y>z (strictly speaking, at most two numbers can be equal), then the largest number that we can form from this digits is xyz and the smallest is zyx. If abc is the difference, then the following relationships hold (can you see why?):

How about other numbers?

We only have 10 numbers above, so how do we show that any 3-digit number chosen will end up with 495?

In general, any 3-digit number with digits xyz, where x>y>z, is of the form 100x + 10y + z. The smaller number is of the form 100z + 10y + x. Subtracting, we have 99(x–z) which means that the difference of any two digit numbers satisfying the conditions above is a multiple of 99. But all the three digit numbers that are multiples of 99 are the ten numbers listed above. Therefore, repeating the process above will eventually lead to 495 for any three digit number. That explains the mystery behind 495.