One to One Correspondence and Hilbert’s Grand Hotel

In the Understanding Hilbert’s Grand Hotel, we have discussed the brilliant schemes of a hotel manager in accommodating finite and infinite number of guests in a hotel with infinite number of rooms, where each room was occupied by one guest. In other words, the hotel was fully occupied. In this post, I will explain the mathematics behind these schemes. To be able to understand the explanation, it his highly recommended that you read first the post in the link above.

Now, how is this possible?

First, if you think of any room number, there is always a room next to it — just add 1. That room exists since there are infinitely many of them. This assures that every guest has a room to move to.

Secondly, since each guest moves to the next room, this assures that no guest will share the same room. 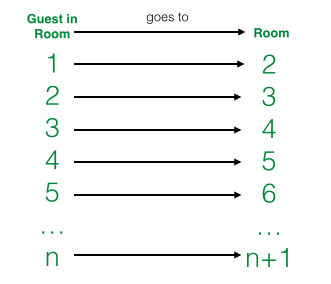 Note that this scheme worked for the 60 guests in the second night, and will always work for any finite number of guests.

During the third night, a bus infinitely long arrived containing infinite number of passengers. Again, the hotel was full and each room was occupied by 1 person. The bus needed 1 room for every passenger. 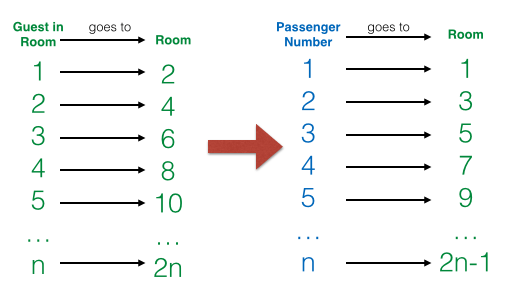 Now, what does this show?

Understanding One to One Correspondence

When we count objects, we are pairing the counting numbers with each of these objects. For example, if we count our fingers on one hand, we can assign the numbers as shown below. Of course, we can assign any number to whichever finger we like, as long as one finger is paired with exactly one number. This pairing will result to 5 as the largest number and we say that we have 5 fingers. This one to one pairing is called one to one correspondence.

With one to one correspondence, we can always see if two sets are equivalent (have the same number elements) by pairing one object to another in one-to-one correspondence. We can see that the set with elements {x, y, z} and the set with {a,b,c} are equivalent because we can assign one element in one set to pair with one and only one element in the other set. In effect, if we know that two sets are equivalent, we can count one set and we will know the number of elements of the other set. For example, in a dance contest where participants are paired composed of a man and a woman, then, we don’t really need to count all the participants if we want to know the total number of participants. We can just count the number of men (or women) and we will know how many participants are there.

One to One Correspondence in Infinite Sets

The concept of infinite sets was formalized by German mathematician Georg Cantor.  During his lifetime, his theories was rejected by many top mathematicians. It was only in later years that modern mathematicians were able to grasp the brilliance of Cantor’s work.