What is the horizontal line test?

In January of this year, we have discussed about the vertical line test. We have learned that if a vertical line intersect a graph more than once, then that graph is not a function. In this post, we learn about the horizontal line test and its relation to inverse functions.

Suppose we have a function

and call the output

. If we do things backward, suppose we have the number

which is in the range of

. What value should we input to

? Let’s have a more specific example.

Suppose we have the function

. And we choose the number

which is in the range of

. What number should we input in

? Well, we will have two numbers, those are

On the other hand, suppose we have the function

. And we choose the number

. What number should we input in

? We only have one and only one number which is equal to

. Now this is true for any

since there is only one cube root of any number.

Now if there is one and only one value of

, then we can define a new function which reverses the transformation. Given the output

, there is one and only one input

. This function is called the inverse function.

Notice from the graph of

below the representation of the values of

is a horizontal line, and the inputs

, there are always 2 intersections. As we have learned in functions, for every input, there is exactly one output and hence reversing

will have two outputs. Thus, it cannot qualify as a function and therefore it has no inverse function. 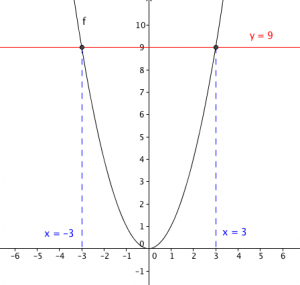 However, if we examine the graph of

, a horizontal line can only intersect it at one point regardless of where you place it. Therefore,

has an inverse function. 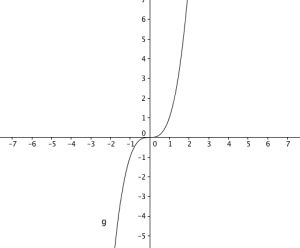