The Basics of Direct Proportion

A car travels at 40 kilometers per hour traveled for 7 hours. The table of the distances traveled with respect to time is shown below.

If there are two changing quantities

and if the value of

also changes 2 times, 3 times, and so on respectively, we can say that

is directly proportional to

. In the relationship above, distance is directly proportional to time.

If there are two changing quantities

is directly proportional to

, then we can use the equation

is a constant. In the relationship above, if we let

be the distance and

be the time, the 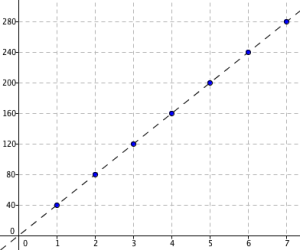 Graphs of direct proportion are linear functions. This can easily be seen because of the constant difference in both

From this post we have learned that direct proportion is the relation between quantities whose ratio is constant. In the next post, we are going to learn the basics of inverse proportions.